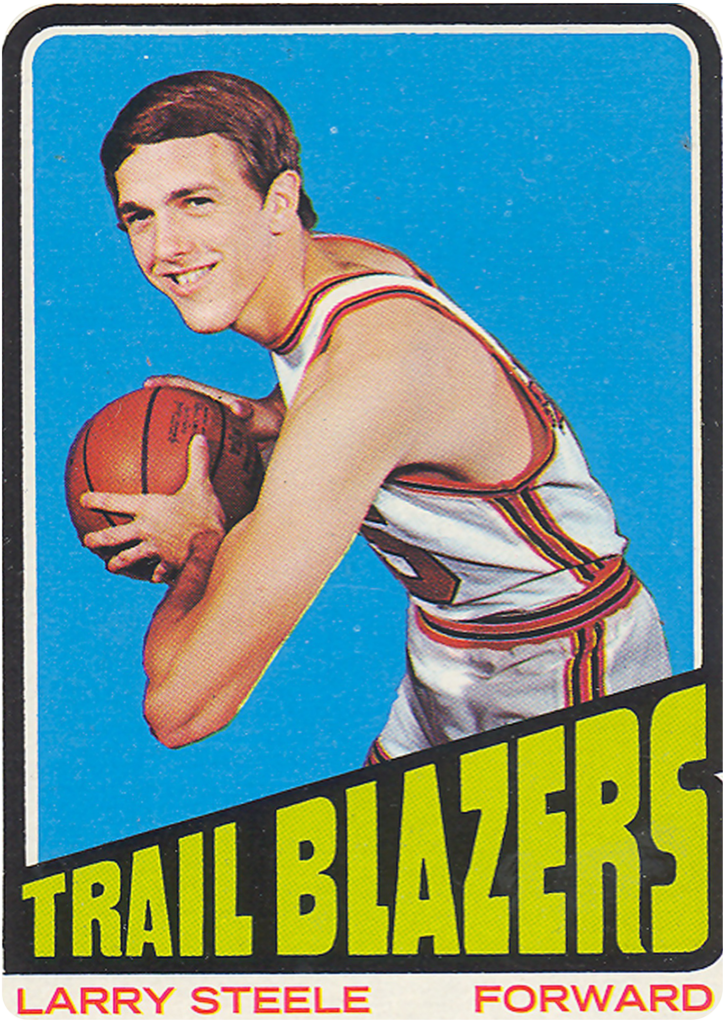 Larry Steele is a former professional basketball player, best known for being on the Portland Trail Blazers team that won the 1977 NBA Finals. Born in Indiana, he played basketball at Bainbridge High School where he was selected All-County, All-Sectional, All-Regional, All- Semi-State, Indianapolis News 1st Team All-State, and a member of the Indiana All-Star Team. In 2003, he was inducted into the Indiana Basketball Hall of Fame.

He was drafted by the Trail Blazers in 1971, at the start of the Blazers’ second season and became a roster mainstay for nine years. He played 20.7 MPG on the 1977 championship team (starting nine games) averaging a career high 10.3 points per game. In a game against the Los Angeles Lakers in 1974, he was one assist short of accomplishing an extremely rare “quadruple-double” (a performance in which a player accumulates a double digit number total in four of five statistical categories-points, rebounds, assists, steals, and blocked shots-in a game).

Knee injuries forced Coach Steele into retirement at the end of the 1979–80 season and the Trail Blazers retired his jersey (15) on October 11, 1981.

After his playing days, he worked in the Blazers front office in marketing and served as a commentator and broadcaster for the NBA on CBS and as a head coach at the University of Portland from 1987 to 1994. He has been running the Larry Steele Basketball Camp since 1988.

Coach Steele lives at Camp Cedar Ridge during the week, and is dedicated to being personally involved at each of his camps. He conducts many of the daily clinics, lectures and demonstrations and interacts with every camper.

Jeff Tachney is co-camp director with Bill Schimel. Jeff graduated in 1998 from Clackamas High School where he played Varsity basketball for three years and was second team All League his senior year. He graduated from Umpqua College in 2000 where he played basketball on a full scholarship. He was an All Conference Player in 1999-2000. He graduated from Southern Oregon University in 2003 where he also played basketball on a full scholarship and was an Honorable Mention All American. He has a sixteen year career with Portland Fire and Rescue and is currently a Lieutenant. Bill Schimel will also be co-camp director for the girls’ camp (see his bio below).

Larry and our Camp Directors handpick our staff. Our coaches consist primarily of High School level coaches, College level players, and outstanding youth coaches. Counselors are typically college age. Examples of our staff include two amazing coaches who will be attending both boys and girls camp: Rosie Contri and Sean Brokaw. Rosie has a unique ability to create a positive learning environment with unmatched enthusiasm that she developed in her 18 years of coaching experience. Sean is one of the best coaches for teaching the fundamentals of the game, particularly for solid skill development for our youngest campers. Sean has over 30 years of coaching experience at the high school, college and professional levels.
We have one coach per ten campers and one counselor to an average of 20 campers. Including Coach Steele, the staff to camper ratio is typically 8 campers to each staff member.

A quadruple-double is defined as a performance in which a player accumulates a double digit number total in four of five statistical categories-points, rebounds, assists, steals, and blocked shots-in a game. This feat is extremely rare:  only four players have officially recorded a quadruple-double in National Basketball Association (NBA) history.

The Larry Steele Basketball Camp is more than a sports camp. It is a great place for any young basketball enthusiast to improve skills, work hard, make new friends and have a great sleep-away camp experience!

SELECT TOPICS AND STAY CURRENT WITH OUR LATEST NEWS